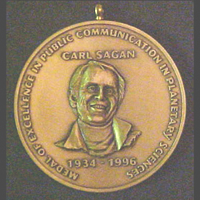 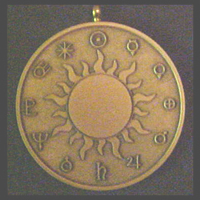 Image of Carl Sagan copied with permission from a photograph by Alexander Tsiaras.

The Carl Sagan Medal (“Sagan Medal”) recognizes and honors outstanding communication by an active planetary scientist to the general public. It is to be awarded to scientists whose efforts have significantly contributed to a public understanding of, and enthusiasm for, planetary science.

Ethics: The candidate for nomination is expected to follow the AAS Code of Ethics (https://aas.org/policies/ethics) and the nomination letter should include a statement to that effect.

The Sagan Medal will consist of a medal with citation, and a cash award in an amount to be determined by the DPS Committee. The recipient of the Sagan Medal is expected to present a public lecture on a subject in planetary science of their choosing. The lecture will normally be given to an interested public audience at a venue separate from the annual DPS meeting. The specific venue will be arranged by the recipient and the DPS committee.

All DPS members are encouraged to submit nominations for the Sagan Medal.