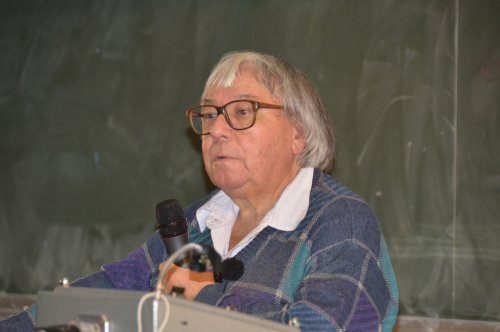 A Tribute to Michel Combes

Michel Combes passed away on March 9, following a week of hospitalization. As a former Director of the Paris Observatory DESPA Laboratory (which later became LESIA) and a former President of Paris Observatory, Michel has played a major role in the life of the laboratory, the Observatory, and, beyond, in the development of planetology and of astronomical instrumentation in France and internationally.

As a former student of the Institut d’Optique in Paris, Michel entered the Observatory in the early 1960s. In 1969, Michel was a major actor in the establishment of a planetology group at the Observatory, first hosted within the Department of Solar Physics and later within the Space Research Department (DESPA).

Mainly interested in optics, Michel was convinced that new projects in astronomy require instrumental innovation.  In 1973, he led a campaign in South Africa to observe the occultation of the star Beta Scorpio by Jupiter. This successful experiment made possible the retrieval of the thermal structure in the stratosphere of Jupiter. In parallel, Michel worked on the development of a Fourier Transform spectrometer operating in the thermal infrared, devoted to the spectral analysis of Jupiter. This instrument was flown on the Kuiper Airborne Observatory in 1973, and has been mounted several times on large ground-based telescopes.

In the 1980s, with Tobias Owen in the US and Vassili Moroz in Moscow, and in partnership with other laboratories, Michel developed the concept of a new instrument for analyzing the near-infrared emission of comets. This successful experiment, launched on the Soviet probes Vega 1 and Vega 2, has led to the first measurement of the temperature of a cometary nucleus, and the detection of several parent molecules outgassed from the nucleus.

In the mid-1980s, Michel became the Director of DESPA, and drove the laboratory toward participation in the ISOCAM camera of the Infrared Space Observatory (ISO) of ESA. In parallel, the planetology group got involved in space projects of planetary infrared sounding. This was the beginning of a series of infrared imaging spectrometers, conceived and developed at DESPA in partnership with Institut d’Astrophysique Spatiale in Orsay and several international laboratories. The first ones were devoted to the exploration of Mars, with ISM/PHOBOS and OMEGA/Mars-96 in partnership with Russia. These instruments inspired the imaging spectrometers of Cassini/Huygens, Rosetta and Venus Express.

In 1991, Michel became the President of Paris Observatory. This duty allowed him to express all his human and international relationship qualities, based on his excellent knowledge of men and institutions.  As a President, Michel initiated a re-organization of the scientific departments of the Observatory.  This was the first step of a global restructuration of the scientific departments, which was completed later in the early 2000. In the meantime, Michel continued to follow the development of infrared space projects at DESPA, in particular in the domain of stellar photometry and planetology. After the failure of the Mars-96 spacecraft just after launch, both experiments were rebuilt and used in other contexts, the French CoRoT mission and, under IAS’ PIship, the OMEGA instrument aboard Mars Express. Later, in collaboration with other international partners, the VIRTIS-H instrument was flown on two other European missions, Rosetta and Venus Express. He was also strongly involved in the NASA-ESA Cassini/Huygens mission through participation as co-investigator in DISR/Huygens and team member on VIMS/Cassini until recently.

In 1999, after two mandates, Michel came back to DESPA, which later transformed into LESIA, and became involved in teaching activities regarding optics, and in the development of instrumental concepts. He also became more and more involved in outreach activities within the Service of Communication of the Observatory, as well as within the team working on History of Sciences.

Thanks to his strong personality, his acute sense of politics, his engagement toward society, his sense of organization and dialog, Michel Combes has played a major role in the field of planetology but also at the level of the Observatory and beyond. Michel was a leader with a strong sense of responsibility, respectful of his international collaborators. He had a very strong capability for bringing teams together – scientists, engineers, technicians, administrative employees – and to make them work together towards a common objective. He will be deeply missed by his friends and colleagues.