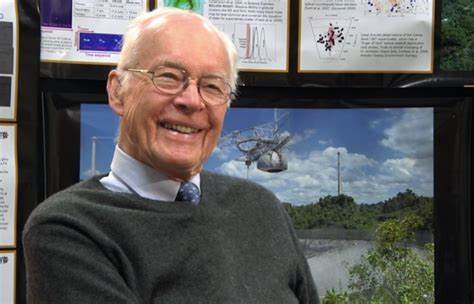 Dr. Gordon Pettengill died on May 8, 2021 at his home in Concord, Massachusetts at the age of 95. Dr. Pettengill was one of the very early pioneers in the use of radar to explore solar system bodies while working at the Millstone Hill facility of Lincoln Laboratories. Having assisted Bill Gordon during the construction of the Arecibo telescope via many trips to Arecibo in the early 1960s, Dr. Pettengill joined the staff of the observatory as Associate Director in 1963.  Between then and when he resigned in late 1965, he worked with Rolf Dyce, Tommy Thompson, Andy Sanchez (U. of Puerto Rico) and, after January,1965, myself on observations of the Moon, Mercury, Venus and Mars. He returned in late 1968 to be the observatory's director, a position he held until December 1970 when he took up a position as Professor of Earth, Atmospheric and Planetary Sciences at MIT. Dr. Pettengill continued his involvement with the radar program at Arecibo, especially observations in the 1970s of the Galilean Satellites and Rings of Saturn working with Steve Ostro, who was a graduate student at MIT, and myself. Gordon was the PI on the radar altimeter instrument on the 1978 Pioneer Venus mission to Venus and he was also the PI on the later Magellan mission to that planet.