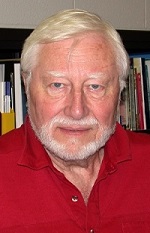 Emeritus Professor William A. Cassidy of the Department of Geology and Environmental Science (formerly the Geology and Planetary Science Department) at the University of Pittsburgh passed away of a heart attack on March 22, 2020. Bill is best known for creating the ANSMET (Antarctic Search for Meteorites) program in 1976, serving as its PI for nearly 20 years. The ANSMET program has recovered more than 22,000 samples its start, and Bill's efforts helped to triple the world's inventory of meteorites.

Because of those efforts, the Cassidy Glacier in Antarctica was named for him, as well as the mineral Cassidyite, and the asteroid 3382 Cassidy. In 1979, he was awarded the Antarctica Service Medal. His efforts in Antarctica were documented in his memoir, "Meteorites, Ice, and Antarctica: A Personal Account" published by Cambridge University Press in 2003.

Bill had a marvelous sense of humor that rivaled his sense of adventure, which took him to impact craters in Canada, South America, Africa, and Australia. He will be missed by his colleagues and friends.