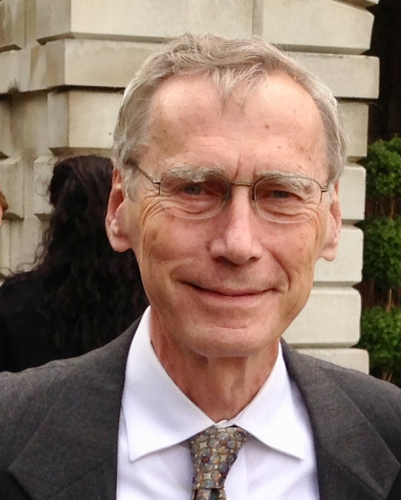 It is with great sadness that we report the death of our colleague, Dr. Jay T. Bergstralh on February 16, 2019, at age 75 after a long battle with progressive aphasia and dementia.  Jay graduated from Carleton College in 1965 with a degree in Astronomy and the University of Texas in 1972 with Masters and Doctoral degrees in Astronomy.  He also gained experience at the US Naval Observatory and Aeronutronic Systems, Inc. during this period.   Jay subsequently accepted a National Research Council postdoctoral position at the Jet Propulsion Laboratory, where he remained as an employee until 1988, when he was detailed to NASA Headquarters.  He became a career Civil Servant in 1992, working at NASA Headquarters until 2004 when he moved to NASA’s Langley Research Center, where he served as Chief Scientist until his retirement in 2012. At the University of Texas, he was the first graduate of the Astronomy Department to do thesis work in the field of planetary sciences.  At JPL he conducted original research on the atmospheres of Venus, Jupiter, Saturn and Uranus and on Jupiter’s satellite, Io, primarily from ground-based astronomy; he also worked on the Voyager mission Photopolarimeter System team. He took on the role of Science Organizing Chair for the first American Astronomical Society’s Division for Planetary Sciences meeting in Pasadena, California, in 1978.   While at JPL he also became the first Chair of the DPS from a NASA field center in 1986-1987.  Following the Voyager flyby, he organized a conference on the Uranus system and was the lead editor of the comprehensive book Uranus, published in 1991 by the University of Arizona Press.  During  his tenure at NASA Headquarters, Jay managed the Planetary Atmospheres research grants program, became the Associate Director for Solar System  Exploration and Program Scientist for the Galileo, Cassini, Europa Orbiter and Messenger missions, and for the Discovery Program.  At Langley, his work included the development of spacecraft instrumentation concepts.

Besides his scientific curiosity and public service at NASA, he was a quintessential gentleman and a man of diverse interests, including history and traditional woodworking. We will miss his quiet sense of humor, including memorable renditions of Gilbert and Sullivan’s “Modern Major General”.  He is survived by Jane, his wife of 52 years, their three children Carol,  Daniel, and David, and by five grandchildren and one great-grandchild.

Further insight into Jay’s life is accessible from an AIP oral history he provided in 1983, available at:  https://www.aip.org/history-programs/niels-bohr-library/oral-histories/2819.

He also provided some public insight into the Voyager mission in a PBS interview with Gwen Ifil on the 20th anniversary of Voyager’s launch: https://www.pbs.org/newshour/show/fantastic-voyage.