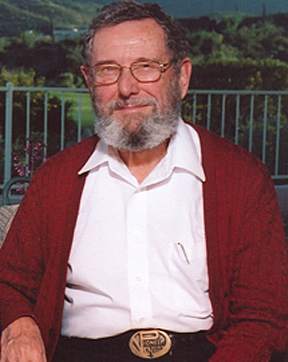 Donald Mount Hunten passed away on the 14th of December, 2010.

He was born in Montreal, before his family moved to London, Ontario where Don attended the Western Ontario University In 1946 he enrolled in the Ph.D. program at McGill University, back in Montreal, where he obtained his PhD in 1950. He later became assistant professor at the University of Saskatchewan. After Joe Chamberlain moved to Kitt Peak National Observatory in Tucson to form a space research group, he invited Don to join it and so Don moved to Tucson. In 1974 he became professor at the Lunar and Planetary Lab. In 1982 he was inducted into the National Academy of Sciences and he eventually became a Regents Professor at LPL, UA.

Borrowing from a citation by T. Owen at the 1998 John Adam Fleming Medal of the American Geophysical Union honoring Don:

Donald M. Hunten is a model for all of us engaged in the study of planetary atmospheres. He is first of all a superb scientist, one of the finest aeronomers our planet has produced. He is that rare combination of instrumentalist, observer, theorist, and responsible representative of his field that makes a "compleat" scientist. Don's contributions are evident everywhere in the record of terrestrial and planetary aeronomy. In the 1950s, he was preeminent among those who developed the ground-based instruments that obtained the spectra required for an understanding of the excitation of Earth's airglow and aurora, and he also developed the theories that explained the data. In the early 1960s, he contributed to the deflation of the Martian atmosphere by demonstrating the weak points in earlier attempts to derive the red planet's surface pressure. Don was the godfather of the Pioneer Venus mission and a key scientist in its highly successful implementation and the analysis of the results.

One of his greatest achievements was the development of the theory of diffusion-limited escape and the subsequent analysis of escape of hydrogen from the planets Turning to the outer solar system, Don developed a model for the atmosphere of Titan prior to the Voyager 1 encounter in 1980 that was so good it became the standard after the data came in confirming it. With his extraordinary intuition and insight, he had correctly surmised that Titan must have a massive, molecular nitrogen atmosphere, well before there was any detection of N or N2 on this intriguing satellite. In the following decade, Don used his excellent grasp of physics together with his extensive experience in deep space missions to play a critical role in the design of the Cassini-Huygens mission, now safely on its way to Saturn and
Titan.

Don Hunten also worked on the analysis of data from the Galileo Probe into Jupiter's atmosphere and investigated the tenuous, gaseous envelopes around Mercury and the Moon. He has been an inspiration and a mentor for many of the currently confirmed planetologists.

Materials from the Donald Hunten memorial session at the 2011 DPS conference: